A Billion Dollar Dream on Wheels!

“We have got a great market and we have got a fabulous organization globally behind us supporting us and believing in the growth of India. So the future is bright.” 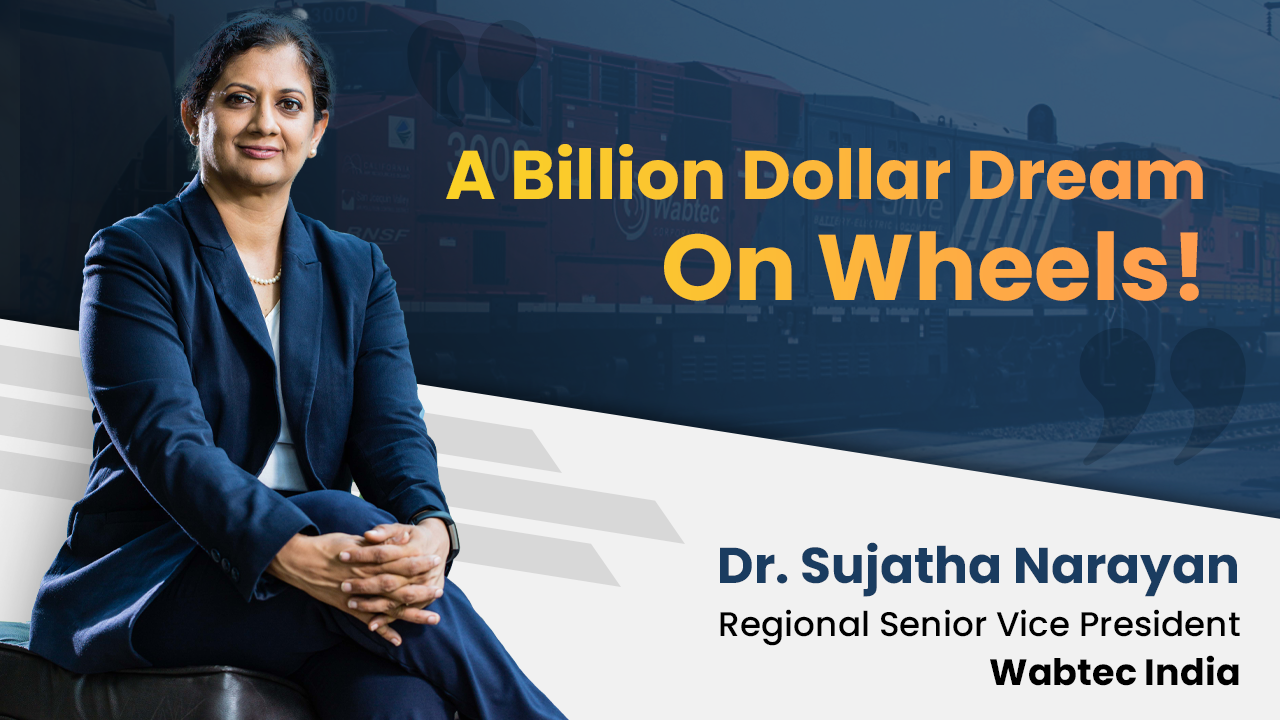 September 2022: In this freewheeling interview with Niranjan Mudholkar, Editorial Director, Pro MFG Media, Dr. Sujatha Narayan, Regional Senior Vice President, Wabtec India, explains the three pillars to Wabtec’s billion dollar goal in the context of ‘India for India’ as a business and also ‘India for the world’ as a business.

The Railways Industry is going places and I think Wabtec is in a good spot. How do you see your regional role in this growth phase?

Very significant! I think the timing is great. From the corporation perspective, I am a Senior Vice President for the company and the Regional Leader for the India region. The India region includes India, Sri Lanka, and Bangladesh. I am responsible in my organization for everything that’s happening in the India region from the industry perspective. So functionally, it starts from business creation, business development, new product, introduction to the market, bringing in orders, delivering revenues, delivering profits, bringing in the cash and so on. It’s the whole gamut of things.

If I look at it from a business perspective, we have got two large businesses in India. One is the locomotives and services business for the locomotive. And the other is a transit components business. And my responsibility is to ensure execution for both. Basically, my focus is to make sure that the commitments on both the fronts are delivered. At the same time, we have upcoming businesses like our digital electronics business, which has a huge potential in India, and our freight components, which is part of our wagon components business.

In terms of the product lines, we do report by the region. Also, while I am ensuring that the numbers are getting delivered, I strongly partner with the global functional leaders. So that’s how the whole job plays out in terms of the expectations from the company. But what I have also done is that I have gone above and beyond and with the team have built this billion dollar vision for India as a region. And we actually have presented that to our global investors who are asking about our India play. We set this goal just before the pandemic hit when I attended the global investor meeting in March 2020 saying that India will be a billion dollar enterprise by 2025. We are talking about India for India as a business and also India for the world as well.

There are three pillars to this goal. The first pillar is ‘India for India’; what we sell in the India market. The second is how we source components and assemblies along with how we manufacture assemblies, as well as at some point locomotives from India for the world. And the third pillar is the whole engineering talent and how much work we do, as a best cost, best engineering site for the world. So the way I see my role, I am responsible for the growth of the region and the growth needs to be profitable. Ultimately, I am the custodian for our customers and our people, both of whom are located in the region. So I am taking the voice of our customers to our corporation, and ensuring that their requirements are satisfied. Same thing with our employees as well! So that’s kind of the role. It’s a very matrix organisation, like you will find in a multinational company. And that’s what makes it more fun, because you have got a lot of push and pull, and that makes the job exciting.

Could you highlight some positives from the National Rail Plan?

Well, to start off, we had a good budget this year. It is very infrastructure growth focused, which is always exciting for a company like Wabtec because that’s what we do. We are an industrial company serving the infrastructure market. So that was good. Now there were multiple elements to the budget like the PM GatiShakti National Master Plan, bringing the underprivileged inclusive development, sustainability, productivity, and how do we get more financing into the country, etc. The thing that stood out from the budget that directly relates to Wabtec is the PM GatiShakti National Master Plan. I think it’s a really exciting plan. The intent of the plan clearly is about using digital technology to have the different modes of transportation talk to each other. If you talk to the people in the government, they will say that the individual transportation modes have been fairly evolved in different states of maturity. But there is almost no mechanism by which they talk to each other. So if you look at a product that is getting imported; let’s say it’s reaching our shores. To where it needs to go where it’s going to be used, that connectivity is very poor. That’s because it has to go through multimodal transportation. And the PM GatiShakti National Master Plan is focused on that. A part of this whole thing is strengthening the key transportation pieces as well. So, for example, the government clearly articulates that one of the key things that drives the economy is your logistics cost. And logistics cost in India is on the higher side. Clearly, one of the main reasons is that there are a lot more things that are moved by road than by rail. Well, rail is significantly lower in cost, significantly less polluting, and needing less energy. So they have a very clear plan that they want to move the modal share from road to rail. And that’s what the railway wants to do as well for its own reasons. So that increases the cargo pushed through the railways. That has direct implications on us, as we are more than 50 percent of a freight company, selling locomotives, selling components for wagons and selling components for locomotives. So it’s exciting!

How do you see Wabtec supporting the Railway Sector in India?

In lots of different ways! Wabtec as a company has been dedicated to railways for more than 150 years now. Our history starts with Westinghouse, who figured out the air brake solution so that trains can move safely and brake safely. So our origins are in railways. But for largely a railway company, we do have some other elements. Now if you look at our portfolio, you will not find a company like Wabtec. That’s because we have got locomotives, we have sub-assemblies for locomotives for all kinds of passenger trains, whether it’s a metro, it’s a suburban and so on. But at the same time, we have got a very large digital suite of products with a wide range of applications. So, besides the rolling stock, which is what we are known for, we have a lot to offer on the digital side as well. Today, the Indian railways are modernizing and you can tell that from everything that’s going on. They are looking at moving the cargo from road to rail, because that’s where they make money. And Indian railways have a lot of stress on their budget because 60 percent to 70 percent of it goes into salaries and pensions and things like that. So, they need to generate more money so that they can invest it back into the network. So that is one of the motivations to bring in more revenues and also address the logistics needs of the country. At the same time, they are trying to modernize in terms of passenger trains as well. They want to increase comfort, they want to increase speed, they want to increase safety and they want to enhance the overall passenger experience. And then they also want to really digitalize in a big way. If you look at each of these spaces, Wabtec is extremely well positioned. So we should be able to really help the Indian railways to a large extent.

And then it’s not only the Indian railways! If you look at the overall rail transport, metros and the rest of it, the next five years are going to be very exciting. India is expected to have metros in a lot of the tier two cities, while the big cities will continue to expand because of urbanization. Wabtec has a very large presence in metros from our transit business. Similarly, we also have the rapid train solutions, high speed solutions, suburban railways, and so on. We have a lot to offer and we are excited about it. And it’s not just me, as the India leader. The global leadership at Wabtec is equally excited. Every time we talk about global growth, India is on top of the list. So Wabtec Corporation is excited about India as a market!

In the past nine months or so, Wabtec has been busy with one major acquisition. Could you share some insights?

Sure. So if you look at the acquisition we made in the friction space (Masu’s railway friction business), it’s a direct alignment to the fact that we are actually the world leader in rail friction! We have factories and businesses across the world including in the US and Europe. So this is a direct link. We did not have a manufacturing presence in India and we were not playing very actively in the Indian railways business when it came to friction. So it was a very good fit for us with a company that had established its presence as well as had the approvals needed to work. But it’s not only for the Indian railways in the metro market, but we also are thinking of it as a best cost country for manufacturing for the global market as well. So in our attempt to grow in India, you will hear a lot more of these things over the next few years. There will be more acquisitions and more large orders. Well, we are very bullish about India!

Your outlook for the future?

I will maybe finish by saying that I am excited to be part of a company like Wabtec, that’s a railways company. It feels like we are part of the nation building process because in India, the railway is the artery and the veins of the entire country! I really feel that I am part of this journey that India started in the last 10 years or so and how we are growing and making our mark in the world. And I think Wabtec is going to be part of that journey. I am excited to be part of it. There’s a fantastic team in India; we have got close to 3000 people in the organization in India. We have got a great market and we have got a fabulous organization globally behind us supporting us and believing in the growth of India. So the future is bright. And I am very open to people who want to join the company because we are growing! 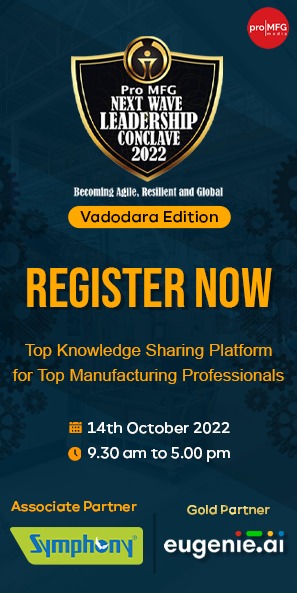